Tom Clancy's Elite Squad is a military role-playing mobile game that was announced at Ubisoft's E3 2019 Conference. Elite Squad will be released sometime in 2020. The game allows players to collect, upgrade, and battle with characters from multiple games of the Tom Clancy video game franchise such as Rainbow Six, Splinter Cell, and The Division.[1]

Players obtain, assemble and upgrade the heroes and villains from across the Tom Clancy’s franchises to lead them in real-time battles across three Game Modes: Campaign, Player Vs Player and Guild Vs Guild.

The game allows players to recruit soldiers from different factions across the Tom Clancy's video game franchise. Soldiers are broken into Heroes and Villains and each have a class dedicated to them to represent their role. 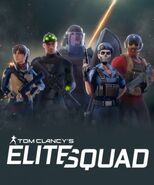 Add a photo to this gallery

Retrieved from "https://elite-squad.fandom.com/wiki/Tom_Clancy%27s_Elite_Squad?oldid=1116"
Community content is available under CC-BY-SA unless otherwise noted.